On The Moon by The Plague Doctors 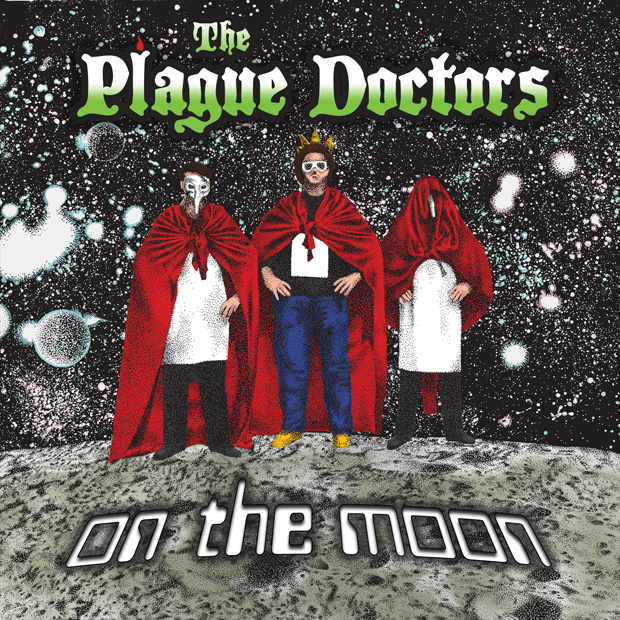 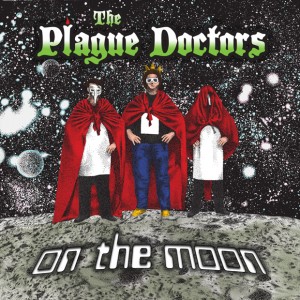 something like this – and the world would be a much better place for it” Why be credible when you can be incredible? This is the motto of The Plague Doctors, the UK’s wrongest pop act.

Paul, John and Paul first met at 2am outside the Chapel of Love and Loathe in the Lost Vagueness field at Glastonbury in 2004. Unfortunately, they didn’t realise that they had met, so it wasn’t until 2007 that they reconvened in Manchester and decided to form a band. Originally styling themselves as The Fucking Kings, they invented the genre of post-karaoke. After a disastrous first gig at the Tiger Lounge bar in Manchester, they decided to uninvent the genre of post-karaoke and actually learn to play their songs on instruments. It was also agreed around this time that The Fucking Kings was not an appropriate name for a band. Swiftly re-emerging as The Plague Doctors, the band adopted their trademark white masks and red capes and began terrorising the pubs and clubs of northern England with their demented pop stylings. Songs such as Snipping Off Your Face, We Killed Everyone at Radio 1 and Diana 2.0 became fast favourites among a hardcore fanbase of around 12 people. Audiences were shocked, confused and entertained in equal measure by the band’s heady mix of synth-powered pop melody, frightening lyrical content and gleeful disregard for musical convention. In 2009 the Doctors put their song Wasting My Time forward as an entry for that year’s Eurovision Song Contest, which resulted in them being made fun of by Andrew Lloyd Webber on national television. Other notable public appearances have seen the band writing a jingle for an 11-year-old football correspondent on Scott Mills’ Radio 1 programme and covering Earth Song at a Michael Jackson tribute concert.

A series of stolen weekends and evenings over the last four years have seen the Doctors come together whenever possible to write and record their music. The result of those sessions is The Plague Doctors’ debut album, On The Moon. It collects the band’s most popular songs from their Manchester years, plus a couple of new tracks for good measure. It is 27 minutes long.

The Doctors appreciate that very few people outside of the band’s hardcore fanbase will have any interest in owning On The Moon, but they had to get it out of their systems. On The Moon is available on CD, vinyl and as an mp3 download. It is recommended that you buy the sumptuously-packaged vinyl version, as the band gets more money that way. Vinyl: £12.99 CD: £4.99 Mp3: £2.99 In addition, the Plague Doctors will be coming out of hibernation to play a number of dates in support of the release of On The Moon, the first of which will take place at Kraak Gallery in Manchester on Saturday 15 November 2014. If you want to see the Plague Doctors now that they’re a bit older and fatter, book your tickets now.

“They were not quite massive ants; not quite huge buzzards; nor were they decomposing human corpses. They were something I cannot and must not recall.” Pop Impresario Jonathan King